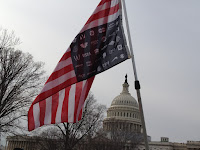 Two years ago Saturday, the Supreme Court issued what may be its most pro-corporate decision yet, in the now-infamous case of Citizens United v. FEC (.pdf download).  The case has become emblematic of the Corporate Court.

Fortunately, many are fighting back. Last week, on the two-year anniversary of the decision a group of citizens gathered on the steps of the Supreme Court to protest the decision and corporate influence in the courts. The protest was part of a nationwide series of “Occupy the Courts” demonstrations.