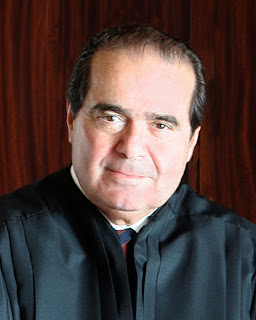 If you think that the Supreme Court is supposed to leave policy and political concerns to the policy-makers and politicians, then your name probably isn’t Antonin Scalia.

In a blistering dissent from the Supreme Court’s decision rejecting much of Arizona’s controversial immigration law, Scalia spends an inordinate amount of time railing against President Obama’s enforcement policies and Congress’ budget, legislative, and appropriation decisions, as well as the politics of immigration enforcement and reform.

Scalia not only characterizes current federal polices as “questionable” or “unwise,” he rails against the way in which laws – even laws not currently at issue in this case! – are enforced:

“The Government complains that state officials might not heed ‘federal priorities.’ Indeed they might not, particularly if those priorities include willful blindness or deliberate inattention to the presence of removable aliens in Arizona.”

“Must Arizona’s ability to protect its borders yield to the reality that Congress has provided inadequate funding for federal enforcement – or, even worse, to the Executive’s unwise targeting of that funding?”

Very few of those things are traditionally considered the domain of the Supreme Court.

Here are some additional points from Scalia’s dissent.

“The Court opinion’s looming specter of inutterable horror – ‘[i]f §3 of the Arizona statute were valid, every State could give itself independent authority to prosecute federal registration violations,’ ante, at 10 – seems to me not so horrible and even less looming. But there has come to pass, and is with us today, the specter that Arizona and the States that support it predicted: A Federal Government that does not want to enforce the immigration laws as written, and leaves the States’ borders unprotected against immigrants whom those laws would exclude. So the issue is a stark one. Are the sovereign States at the mercy of the Federal Executive’s refusal to enforce the  Nation’s immigration laws?”

“What I do fear – and what Arizona and the States that support it fear – is that “federal policies” of nonenforcement will leave the States helpless before [the] evil effects of illegal immigration[.]”

“The President said at a news conference that the new [DREAM Act] program is ‘the right thing to do’ in light of Congress’s failure to pass the Administration’s proposed revision of the Immigration Act. Perhaps it is, though Arizona may not think so. But to say, as the Court does, that Arizona contradicts federal law by enforcing applications of the Immigration Act that the President declines to enforce boggles the mind.”

If you think some of Scalia’s arguments sound more like policy or political points than analysis of a state law and whether it’s preempted by the Constitution, you’re not alone.
Tweet