A Victory for Voting Rights 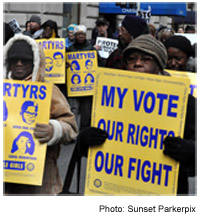 The Court of Appeals for the D.C. Circuit ruled today that section 5 of the Voting Rights Act remains constitutional. The case, Shelby County, Alabama v. Holder, is an important victory for advocates of fair voting practices. In siding with the attorney general, the court eloquently and powerfully bolstered the rights of Shelby County citizens to vote in elections free from racial discrimination.

Section 5 of the Voting Rights Act, originally passed in 1965 and reauthorized in 1970, 1975, 1982, and 2006, requires six states and numerous local jurisdictions to seek “preclearance” for any changes to their electoral system because of past voting discrimination on the basis of race. For example, last year the U.S. Department of Justice refused clearance of both South Carolina and Texas’s Voter ID laws under section 5. Both states are bringing suit to challenge the justice department’s actions. Texas is directly challenging the constitutionality of section 5.

Section 2 of the Voting Rights Act, which prohibits any state from adopting electoral procedures that undermine minority voting rights, is also litigated with some frequency, but it is section 5 that has become a lightning rod for conservatives and states’ rights advocates, because it mandates additional scrutiny and oversight of particular states’ electoral activities. There are numerous section 5 suits currently percolating through the lower courts, undoubtedly because the Supreme Court’s conservative majority indicated in its 2009 decision in Northwest Austin Municipal Utility District Co. v. Holder that it would be receptive to such challenges. Earlier this year, while refraining from ruling on the constitutionality of section 5, the Supreme Court issued a terse unsigned opinion directing a district court in San Antonio to give greater deference to racially gerrymandered electoral maps drawn by the Texas state legislature.

Next stop: the Supreme Court?

When Shelby County appeals the decision to the Supreme Court, as it inevitably will, the case could become the vehicle that the conservative majority uses to strike down section 5 of the Voting Rights Act as unconstitutional. If the Supreme Court ultimately reverses the D.C. Circuit’s decision in this case and rules section 5 unconstitutional, it will be through no fault of the lower court. Judge Tatel, writing for the two-judge majority, has taken a careful look at the legislative record and produced a carefully reasoned and thoughtful opinion.

The opinion begins by acknowledging the Supreme Court’s skepticism about the continued constitutionality of section 5: “The Supreme Court warned that the burdens imposed by section 5 may no longer be justified by current needs and that its geographic coverage may no longer sufficiently relate to the problem it targets.” In other words, the question before the court in this case was whether “Section 5 remains a ‘congruent and proportional remedy’ to the 21st century problem of voting discrimination in covered jurisdictions,” and whether “Congress exceed[ed] its constitutional authority when it reauthorized section 5” in 2006.
After carefully reviewing the legislative record, the D.C. Circuit’s answer to the first question is yes -- section 5 remains congruent and proportional -- and its answer to the second question is no -- Congress did not exceed its authority.

In deferring to Congress’ reasoned judgment, the court noted that "Congress drew reasonable conclusions from the extensive evidence it gathered and acted pursuant to the Fourteenth and Fifteenth Amendments, which entrust Congress with ensuring that the right to vote--surely among the most important guarantees of political liberty in the Constitution--is not abridged on account of race.” In evaluating the congruence and proportionality of section 5, the court underscored the existence of the Act’s “bailout” provisions, which were liberalized in 1982 to allow any jurisdiction with a “clean” voting rights record over the previous 10 years to be relieved of its section 5 preclearance obligations. These provisions render section 5 relatively flexible and responsive, capable of adjustment as the circumstances on the ground change, yet strong and firm to protect voters when the circumstances remain sadly the same.

In the end, the opinion stands as a testament to the importance of judicial restraint. The court states at the outset, “Although our examination of the record will be probing, we remain bound by fundamental principles of judicial restraint. Time and time again the Supreme Court has emphasized that Congress’s laws are entitled to a ‘presumption of validity.’” And in affirming the constitutionality of section 5, the court concluded, “we owe much deference to the considered judgment of the People’s elected representatives.” We can only hope that the Supreme Court exercises commensurate judicial restraint in this case, and various other cases currently before it.
Tweet