Home » a question of integrity , ethics » A Question of Integrity Screening at Catholic University

A Question of Integrity Screening at Catholic University

Posted by alex Posted on 2:14 PM
Tuesday, Alliance for Justice screened “A Question of Integrity: Politics, Ethics and the Supreme Court” at Catholic University of America’s Columbus School of Law in Washington, D.C.  The screening hosted by the law school’s America Constitution Society chapter was enthusiastically received by over 70 law students eager to know more about the Code Conduct for U.S. Judges and why the Court is not required to follow it, as well as the Ethics in Government Act and the current process for recusal. 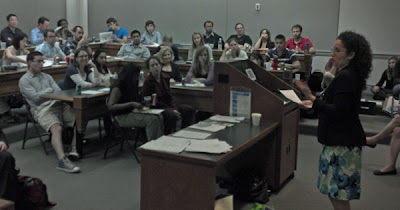 AFJ’s Dorot Fellow Ashley Smith led the discussion period fielding thoughtful, challenging questions about the need for more transparency in the recusal process, if justices attending fundraising events adds to more transparency rather than hinders it,  and if politics have invaded this current court so thoroughly that it’s not just infeasible but naïve for litigants to demand or even expect impartiality to still be the law of the courtroom.

CUA law professor Suzette Malveaux introduced the film and even asked a few tough questions herself about the inevitability of friendships between justices and other powerful government officials and the practicality of requiring every justice who has a relationship with an official to recuse. Ms. Smith’s response was, “Not every justice; just the ones who know that the official will appear in his or her court before they agree to go duck hunting with him!”

The discussion ended with the hope, but not a full-fledged demand, that all justices, conservative or liberal, be held to the highest ethical standards. “A lot of it I have a problem with, a lot of it I don’t. It’s not so black and white,” as one student said after the screening.

But when it comes to ethics and the highest court of the land, too much gray can be the difference between maintaining this country’s legacy of belief in an impartial and unbiased system of law, or turning our backs on it. However, as Prof. Malveaux suggested, the discussion itself helps assure us that the legacy will continue.
Tweet