A Shockingly Clear Case for Reform 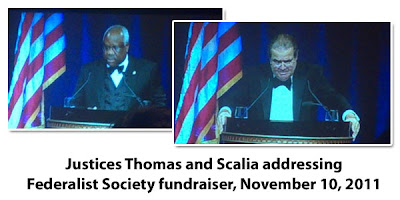 If they were mere federal judges they could not have accepted the invitation, because Canon 4(C) of the Code of Conduct for United States Judges prohibits personal participation in fundraising activities. It states that judges should not “solicit funds for any organization, or use or permit the use of the prestige of judicial office for that purpose.”

It’s an excellent rule and it would apply to the Federalist Society’s $175 a plate, sold-out dinner, which is clearly a fundraiser, with Justices Scalia and Thomas the star attractions in the black-tie optional event billed as “A Celebration of Service.”

The problem is that Supreme Court justices are not bound by Canon 4(C).

There's nothing stopping the Court from voluntarily adopting the same Code of Conduct that binds every other federal court, and putting an end to the kind of behavior that has left many Americans wondering if Supreme Court justices are becoming "politicians in robes."
Tweet